Today I got an e-mail from Google Wave, one of my waves had been updated! Excitedly, I jumped over to wave.google.com, only to find that it was yet another “null post”: 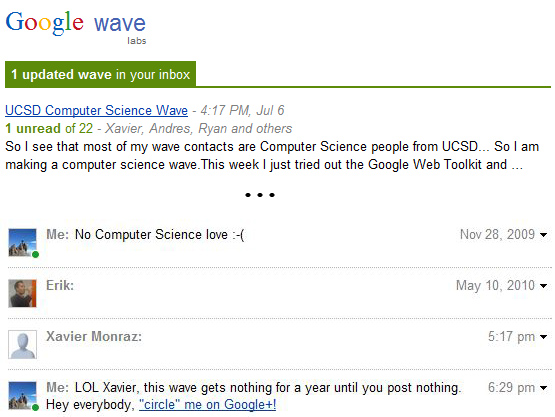 This was one of the curious “features” of Google Wave.  This wave got a little discussion before this, but it never got picked up by any of the Computer Science students I went to school with.  If the computer science students aren’t willing to seriously touch your product, you have a problem.

I wonder if there was a meeting at the Wave department at Google where they weighed the pros and cons of being able to post absolutely nothing.  Somebody must have emphatically defended the empty post as some sort of place-holder for future content.

Wave had so many dimensions of complexity that made it impossible for Google to refactor this complexity into networked product “for dummies”.  So they went back to the drawing board and produced Buzz.  I don’t know why buzz was such a failure.  I think I removed it when it ended up showing a massive unread message count next to my inbox.  Now G+ has fixed that problem moving that to the top right and minimizing the counter.

Wave did too much, Buzz did too little and was annoying like a bee in your ear (at least for any inbox zero practitioners).   Is Google+ in the Goldilocks zone?  I think so, but if and only if Google can get it opened up quickly enough before the early adopters lose interest.